"Dr. Burton cares about her patients and [their] individual experience. She personalizes her treatment approaches based on the needs and goals of her patients and involves both the patient and the parents in the treatment program. Although many of the medical issues she deals with are very complex she is able to explain things in a very simple straightforward way that is easy to understand. She is everything you want in a doctor: knowledgeable, caring, and empathetic! We love her." 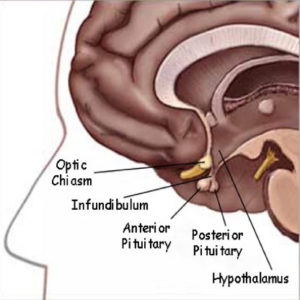 The Pituitary gland is located at the base of the brain behind the eyes also known as the “Master Gland” of the body. It controls multiple hormones and can be affected from birth or later in life. Congenital or acquired cases can cause the pituitary gland to be deficient in one or several hormones. The pituitary gland is responsible for producing ACTH (adrenocorticotropic hormone), TSH (thyroid stimulating hormone), GH (growth hormone), ADH (anti-diuretic hormone), LH (luteinizing hormone) and FSH (follicle stimulating hormone). Panhypopituitarism is a deficiency in one or more of these hormones. Congenital conditions such as septo-optic dysplasia or other anatomic abnormalities can be the culprit in infants. In older children, radiation to the brain or tumors can cause panhypopituitarism.

Usually, the evaluation begins with blood tests to look at the various pituitary hormones and possibly an ACTH stimulation test. If there is a concern for Diabetes Insipidus (lack of ADH), urine tests or a water deprivation test may be done. MRI of the brain may also be done to evaluate the anatomy of the pituitary gland.

Treatment involves replacing any hormones that are deficient with hormone replacement therapy. If there is an anatomical cause such as Septo-Optic Dysplasia, the child may also need to be followed by Ophthalmology and Neurology. If there is concern for a tumor, an oncologist may also be consulted.

This website uses cookies so that we can provide you with the best user experience possible. Cookie information is stored in your browser and performs functions such as recognising you when you return to our website and helping our team to understand which sections of the website you find most interesting and useful.

Strictly Necessary Cookie should be enabled at all times so that we can save your preferences for cookie settings.

If you disable this cookie, we will not be able to save your preferences. This means that every time you visit this website you will need to enable or disable cookies again.